I'm about to go a little ranty on my car, and most modern cars. Yes, I love my car - most of you know that already. But there's ONE thing about my car that bothers me from time to time, and when it does bug me, it REALLY bugs me – and that's the size of the A-Pillar. (That's the first pillar in the cockpit - the piece the windshield attaches to.)

You may think I'm nitpicking again, and you may be right, but today's cars have HUGE A-Pillars. Usually, as in the case of my 2009 Pontiac G8 GXP, these are due to airbags being placed in there. Yes, Virginia, airbags DO save lives – but they're also annoying under certain circumstances. In my case, if I'm making a left turn on a windy road, frequently the A-Pillar will block my view of the oncoming lane, so I have no idea if there's a car coming at me. 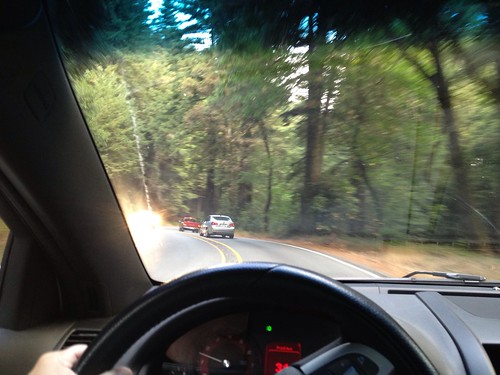 Take a look at the picture on the right. See that light coming off the A-Pillar? That's a car in the oncoming lane. I'd have never known he'd be there if he didn't have his headlights on. On some left-hand curves, I have to totally rely on faith that there's no one crossing the double-yellow line, because I can't see. (And don't stress, I took that shot by holding the camera next to my head and mashing the shutter until I got a usable shot. Only took 108 exposures!)

On really tight corners, I can't even see the line of the road ahead of me due to the A-Pillar blocking my view. That REALLY annoys me, as I've got to just try to keep the car in its lane, but I can't start mentally setting up for the next turn. Feels wrong and unsafe as hell to me.

Yeah, I know, I'm picking nits. But this has bothered me for a while, and I felt the need to vent about this. Thanks for listening, or whatever.