So, as I wrote earlier, I was very, very wrong when I thought Apple wouldn’t release an iPad mini. They did, and I just got my grubby little paws on one. Here’s a brain dump on what I think about it after spending a couple of days with it. I was going to post pictures, but I’m lazy, and it’s absolutely impossible to compete with the great shots over at iMore.com’s review of the iPad mini, so you’re just going to get a brain dump of my thoughts. Hey now, no whining allowed while reading my blog, so just deal with it. ;)

First, it’s tiny, and light. I know you’re thinking, No shit, Sherlock, it’s called the iPad mini. And you’re right, but adding the mini suffix to the name doesn’t convey how light the device is. It’s really light, if you compare it to the 3rd or 4th generation full-sized iPad. So much that I called that version of the iPad the iPad Chunky the other night. How small is the iPad mini? Well, let’s compare it to another device I have around here the Amazon Kindle Keyboard 3G (the 2 year old, black and white unit). This Kindle is probably my favorite as it’s light enough to read, yet substantial enough to not feel like a toy. How does the iPad mini hold up?

That’s not a device that feels heavy or big, by any stretch of the imagination. The iPad mini is only slightly larger in most of the dimensions (except thickness) but not by a large amount. This makes it very comfortable to use for reading. When you have each of these devices in your hands, the actual size differences are difficult to spot. I promised I wasn’t going to show any pictures, but what the heck here’s one of the mini next to the Kindle (and yes, that’s a Star Trek LCARS lock screen don’t judge me!) 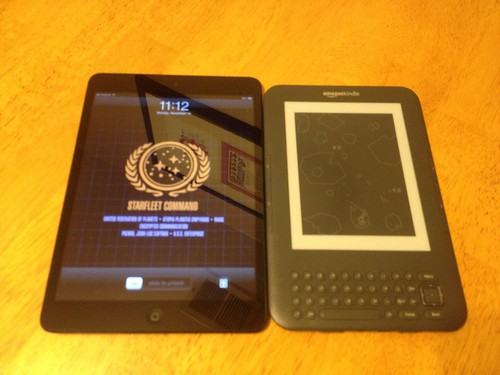 iPad mini and Kindle Comparison – not much difference!

Next, it doesn’t feel slow or clunky, despite the A5 (iPad2-class) processor in it. The unit is basically an iPad2, but thanks to the iPad2-style screen (non-retina, 1024x768 resolution) the mini feels snappy enough for most tasks. (I can’t believe I’m praising the fact that the mini DOESN’T have a Retina Display.) Playing Asphalt 7 on it made it bog down only slightly on the really heavy graphic screens, but other than that, it seemed to zip right along.

As far as that display goes, did I want a Retina Display? YES, absolutely. My main iPad is a 3rd gen unit with the Retina Display, so not having it was very noticable to me, particularly when reading an e-book set to a small font. That’s about the only time I jonesed for the high-res display, though. For most things - consumption situations, like reading Facebook, Twitter or Web news - the screen was absolutely fine.

Of course, this being a 4G iPad, it also lets you have All The Internets at your fingertips, and its no speed slouch, either. In my regular coverage areas (at home in Gilroy, CA - and work in Mountain View, CA) I regularly got over 10Mbit/sec on download. Not only that but it works as a dandy hotspot. I ran a little longevity test with the screen off, the iPad mini stayed in hotspot mode for a little over 25 hours before the battery ran out. I suspect you’d exhaust your dataplan before you ran the battery out of the mini when using it this way.

So, let’s see: we’ve got what basically equals an iPad2, with much less weight and size. Is it worth buying? Well, that depends on your use model. If what you’re doing is mostly consuming media, reading, or websurfing, then the iPad mini is for you. If you’re going to do any kind of content creation, then you’ll probably want one of the mini’s bigger-boned siblings.

As for me? Well, thanks to working in the mobile space I’ve got access to this 16GB Verizon mini. And it’s not enough. I’m itching to get my own mini, but with more storage. It’s stupid - I’ve got a 64GB iPad3. Buuuuttt the mini is so damned handy and easy to haul around. It absolutely disappears in my ScottEVest jacket. It really is a great mix of portability and power. Despite my past opinions and writings, I find myself drawn to the mini. If you’ve been following me on the Internets at all, you’ll know that I don’t generally change my mind easily. This product’s made me reconsider what I’ve said ask my wife, that’s something unique.