So, it’s been one month of tracking my data usage with AT&T and my iPhone 4S. The numbers are very interesting. The raw stats are as follows: 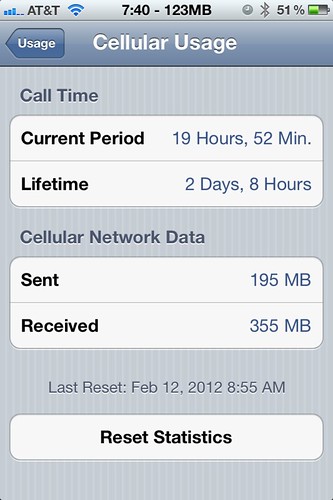 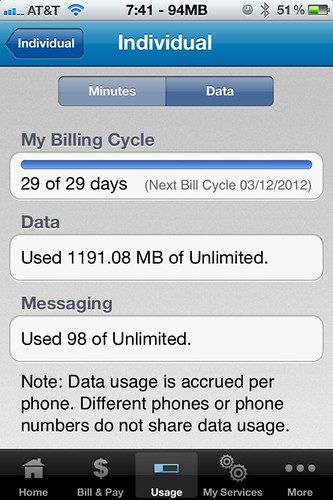 Oddly enough, the AT&T site reports I’ve used almost twice as much as the phone says I’ve used. I’m not the only one to see issues like this, by the way.

I was willing to write this off as an anomaly, but twice the data use means there is SOME kind of issue, somewhere. So, I’ve reset my counters again, but I’ve also reset my wife’s iPhone as well as my daughter’s. Now I’m collecting three different sets of data for the month of March, hoping to make sense of this.

More to come as the weeks roll on. If you’re interested in doing this yourself, it’s pretty easy… Just go to the Settings app on your iPhone, hit usage, then select cellular data at the bottom of the usage screen. To get the AT&T side of the data use, there are three ways to get that data. First, you can find it on their website if you have an account and login. Second, you can use the myAT&T app from the app store. Or the easiest way to collect what AT&T thinks your usage is is to just simply make a call to *3282#. You’ll receive a text message not long after with your current data use.

The more of us that track this, the easier it will be to get to the bottom of it, whether it’s a problem in the firmware of the iPhone or AT&T doing something fishy with the billing.