About three weeks ago, I was lucky enough to snag an iPad2. Specifically, I got a 32GB wifi-only version, in black. While the original iPad was OMG SHINY and stuff, I avoided buying one for several reasons:

However, I started socking money away with the intention of buying one in a year when the next generation hit. As we all know, that came to pass, and the demand for these little gadgets was – and continues to be – insane. I was able to get my hands on “my” iPad2, however, after about a week of dealing with Apple Business.

Before I start going into my thoughts regarding the device, I need to mention my lovely wife – she played with my iPad2 and said “I want one”, so we went to Target and got her a first gen iPad on discount. That’s an indicator of how compelling the device is.

So anyway, my thoughts. Keeping in mind that my major tablet experience involved a rooted NookColor – after using the iPad2 for a few weeks, there’s no way I’m going back to anything else. It’s not any one thing that’s lightyears ahead of the competitors, rather, it’s the entire package. The form factor is KILLER. Yes, the NookColor fit into a large pocket, but the iPad2 isn’t unwieldy, and the 9.6” screen size allowed Apple to do one really really smart thing… it let them actually create an on-screen keyboard that is functionally the same size as their “normal” keyboards, key size and spacing wise. 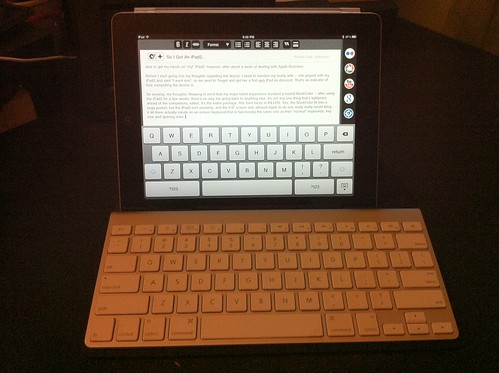 This may seem trivial, but it’s really part of the thinking that I find in Apple products more often than not. It’s not perfect, and yeah, Apple screws up on a lot of other things, but they get UI, muscle memory and the like more often than not. Having the on-screen keyboard allows someone who’s used to the MacBook sit at an iPad and feel fairly comfortable using the on-screen keyboard. The Android on-screen keyboard on the NookColor was so horrific I dreaded typing much more than a tweet on it. The iPad has been really useful in meetings and such for note-taking (or for tweeting). I miss a “real” keyboard for anything heavy-duty, but not so much that I’m running back to my desk for my laptop.

As far as battery life goes, I’ve gotten 11 hours of realistic use out of the thing. That’s simply incredible. My laptop gets 4 hours on a good day, and that hackintosh netbook I built would get 2 hours at most due to its tiny 3-cell battery. For once, battery life on a computing device simply isn’t an issue.

Back on form factor for a second… The form factor thing really isn’t just window dressing either. The iPad is SOLID. It feels like you’re carrying around a clipboard. Yeah, it’s a $600 clipboard that might shatter like a pane of glass if you dropped it, but it still feels like something familiar. Yet, the tech in it makes you feel like you’re wandering the Enterprise with a PADD in your hand. I sometimes half-expect Lt. Worf to come around the corner at the office and order a glass of prune juice when I’m carrying this thing around the office. It’s that nerdly cool, no joke.

Moving on to apps… Oh, apps, and the App Store. Yeah, the App Store is a walled garden, and let me tell you, no one does walled gardens like Apple. It bothers me that it is what it is… but the flowers are so pretty and smell so good that I can forgive the fact that you can’t get outside the garden. Having that control, from the hardware platform, up through the OS, and into the application stack allows the iPad to “feel” unified. As always with Apple, it’s about the experience. Many of my more open-source friends give me a bunch of crap about “experience”, but in my opinion its something that shouldn’t be poopoo’d, ignored, or given secondary attention. The Ubuntu folks have gotten this right in lots of ways, but unfortunately the lack of a standardized platform forces compromise and introduces all kinds of hardware-related issues.

The iPad does require a few app purchases to be truly useful for me. Amongst these are things like an SSH client. Yeah, I know. The iPad is UNIX underneath, and I SHOULD be able to simply pop open a terminal and do my thing. I wish I could. But the SSH client called “Prompt” (by Panic, who makes absolutely stellar apps) is $4.99, and it simply rocks. I just spent $600 on a tablet, I can drop five bucks on an app that makes it more usable for me. The fact that any app that runs on my iPhone just automatically can work on the iPad too makes it that much more attractive.

Last, and most certainly not least, are the damn games. Yes, I said it. The freaking games. Name another video gaming platform where the MOST expensive games top out at $10, and the majority of them are between free and $2? Yeah, there aren’t many. I love the fact that I can get a quick gaming fix and put the thing away and never play the game again and not feel like I’ve sunk a bunch of money into something I’d never play again. I like games, don’t get me wrong, but I simply don’t have the TIME to play them like I’d like to play them. With the iPad (and the iPhone to a lesser extent) I can feed my gaming fix without plunking a bunch of money down each time.

Yeah, the iPad2 has two cameras. Yeah, it’s got a crazy fast dual-core CPU with OMGWTFLOLBBQ graphics. Yeah, it’s 33% thinner than iPad 1. But all of that doesn’t matter - what matters is the overall experience, and the platform. I could have had this a year ago with iPad 1, but I didn’t bite until now. And as of this writing, I’m glad I did. Hauling the iPad2 with me when I’m on “on-call” duty for work is a heck of a lot easier on my shoulder than hauling my laptop bag. I don’t even have to worry about taking a charger, as the thing’s got plenty of longevity when it comes to the juice department.

I’ll probably get a bunch of flak for this post, but I don’t really care. Right now, the iPad2 meets about 85% of my computing needs, and it simply gets out of the way and lets me do what I need. Could I use one all day long, every day? No. Will it replace my main computer(s)? No. But it will let me be a heck of a lot more mobile and bring a computing environment with me to places I’d have had to haul a laptop bag to. And for me, right now, that’s plenty. By the way, I wrote this entire post ON the iPad. :)