So, I’ve had a Harmon Kardon Drive + Play in the Yeti (my car, for those of you who haven’t been following me on Twitter) for some time. This little gizmo lets me control my iPod without having to dork with the iPod - the iPod can stay in the console or glovebox or whatever, and the Drive+Play gives you a fairly 60mph-friendly interface. No worse than a standard car stereo, at any rate. The Drive+Play is the little tiny monochrome screen in the picture below, with the control knob just below it.

This little gizmo has been hooked to my old 4th generation click wheel 20GB iPod, until yesterday, when said iPod finally went to iPod Heaven. Poor lil guy, he was six years old, went thru three cars, and more interface methods than I could count. Yesterday when I went out to the car he started stuttering something awful, and became unresponsive to his UI. He’d gone to that great Apple Store in the Sky. After a considerable mourning period of about 20 seconds, I tossed the dead ‘Pod in the trunk and reached for the 1st generation 8GB iPod Touch I’ve had in my bag for a while. It worked great, and I drove home rocking out to tunes playing from some new solid state goodness.

Anyway… after I got home, Kelly announced she’d be going to see SparklyVampireScreamingTeenMovie(TM) for the 2nd time. OK, fine, no worries, I’ll put monkey 1 and monkey 2 to bed. So she takes off, and I do the fatherly thing of putting the kids to bed, and then I settle in to do some work.

… time passes… work is over…

Now it’s like 11pm and I’m just zoning at the computer, trying to decide to watch a movie or tackle some Garlic Festival tasks I need to do, when it hits me. It’d be really nice if my iPod in the car could sync with my desktop PC, without me having to bring it inside. There’s no reason why it shouldn’t be able to - the iPod Touch has wifi, and the house is BATHED in 802.11g (I have no less than three access points covering my house and property. Cause I need 54Mbit at the back fence. Don’t ask why. I just need it.)

So I start poking around and discover this is totally doable. Turns out there’s a jailbreak application called Wi-Fi Sync for iPod Touch and iPhone that allows iTunes to talk to the iDevice over Wi-Fi. PERFECT. So I grab that sucker, pay the $9 (Hey, I’m on a roll here, and $9 is at the limit of my “I’ve got to see this work” budget), and start configuring it. The app works great, except you have to push an icon on the iPod Touch to start the sync process with iTunes on the desktop. This defeats my lazy man purpose of NOT having to take the iPod out of the car, or go into the garage, to sync my tunes.

I noodle a bit, and remember there’s a VNC Server available in Cydia for jailbroken iDevices. If I were to pop that app on the iPod, I should be able to VNC into the iPod and fire up the sync process, then hit the sync button in iTunes, things should Just Work. I installed Veency on the iPod via Cydia, and enabled Insomnia to keep the wifi connection online, and it worked like it should! I could VNC into the iPod and start the sync without any problems. 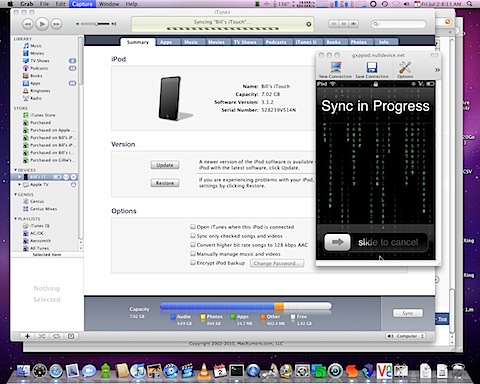 I went to bed around midnight, with the lil iPod Touch humming away thanks to Insomnia keeping it up. I logged back into the iPod via VNC this morning and it had 2/3 battery remaining, and was ready to sync again. Nerd task completed. :)