So… not too long ago I nabbed a used Acer AspireONE from a buddy. He wasn’t using it much and let it go for a song - it’s the base model with 512MB RAM, the 8GB SSD, and Linux. The first thing I did was rip that lil puppy open and jam a 1GB stick of RAM in its guts, giving it a very usable 1.5GB RAM.

I’ve been living with the lil fella ever since - it practically disappears in my laptop bag, even with the MacBook (yah, blasphemy, I know) in there. I’d mentioned the netbook a couple of times in the Arstechnica #linux IRC channel, so I figured I’d give Truck a hand and whip out a lil comparo of the physical size of the machine. Speed benchmarks are easily google-able, but overall size less so. So… here are some pics.

First, let’s see the netbook (it’s got Songbird stickers on it), lid closed, atop the venerable Fujitsu P7000 (FujiP). Keep in mind all my writing for Ubuntu Hacks was done on the FujiP. 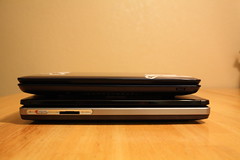 Next, a top-down shot of the same setup. The lower left corners of both computers are lined up, and the FujiP is only a little deeper and wider than the AspireONE. 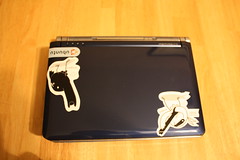 For comparison sake, the netbook atop a 14” IBM Thinkpad T42, one of the more common laptops out there… 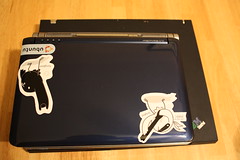 Now, a side-by-side shot of the AspireONE and FujiP. Keyboard size is nearly identical, though the FujiP wins out on screen space by nearly an inch. Sorry for not having the FujiP powered up, but the battery was flat dead in the lil guy. 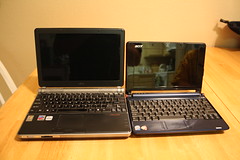 Another keyboard shot - this one head-to-head. The keyboard on the FujiP is nicer, but only marginally. 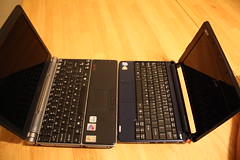 And for comparison, side-by-side shots of the AspireONE and the Thinkpad T42. The keyboard size difference is definitely more noticeable now. 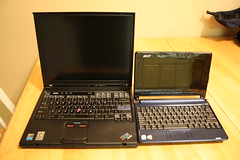 To really drive the point home on how small this netbook is, I put it on top of the T42’s keyboard. Looks like the T42 could swallow the netbook - and the T42 was considered a “thin and light” laptop not all that long ago. How the times they are a-changin’…. 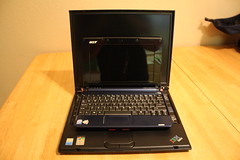 Hope this helps you decide if you can use a netbook for daily tasks. For me, it couldn’t be my only system. However, as an extension of a desktop or fullsized laptop, or as a semi-disposable computer to take into questionable situations (on a boat?) it’s totally usable.