Well, I returned from Linuxworld safe and sound, and with cash still in my pocket. What was the show like? Read on…

This year’s Linuxworld, like the last couple, has been invaded by the flashy, high-dollar, corporate booths. Unfortunately, unlike the heyday of the dot-com bubble, when everyone had flashy booths, and booth babes to populate said booths… this year there was a conspicuous absence of booth babes. Sorry fellas, the closest thing to a booth babe was a female penguin walking around (well, it looked more like a penguin in drag… I was in San Francisco, after all…) so don’t expect any booth babe pix. As a buddy said, “A couple of years ago, booth babes were everywhere. Now, all they give us is lesbian union chicks.”

Now that that’s out of the way… the first thing you saw upon decending the escalator into the bowels of the Moscone Convention Center was this large Linuxworld sign: 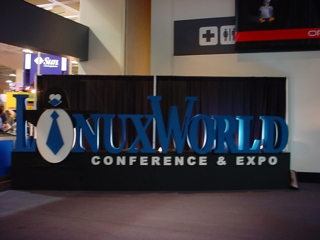 This was money that could have been better spent on other things, say… booth babes… but I digress.

The first booth I visited upon my arrival was perhaps the deadest booth there. No, not SCO’s - they didn’t have a booth. I’m talking about our good friends at Microsoft. Here you can see their huge banner, along with something they call “Shared Source”: 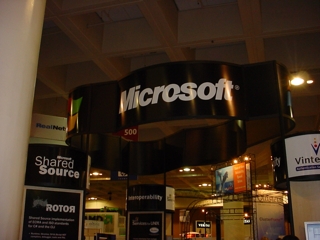 At this point I screwed up my courage, and walked over there. I pointed to teh sign, and asked one of the marketdroids, “Say, what’s this ‘Shared Source’ thing you’ve got posted there?”
“Well, um, sir… the person who knows all about that is out at lunch,” she said (I took this to mean he’s drinking heavily at the pub down the street.)
“That’s OK, forget it,” I said as I walked away.

Not far from the Microsoft booth was the .org pavilion, by far the most interesting area of the exhibit hall. Not much glitz and glitter, but the most innovative and unique things come out of this area.
The first thing that caught my eye was the Gentoo booth. The running joke on IRC is that these guys got to the show a week early since they needed to create the building materials for their booth. Ha ha. 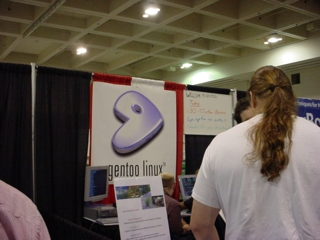 Seriously, though - the Gentoo guys were cool. Daniel Robbins was there, and he was pretty approachable. They were giving out LiveCDs (precompiled, natch) for x86, Athlon, and PPC. I picked up a LiveCD for my PowerBook, but sadly, it just powers down after starting to load the kernel. Side benefit, though - it resets the PRAM for you. No more Opt-Cmd-P-R! ;)

The EFF was present, too: 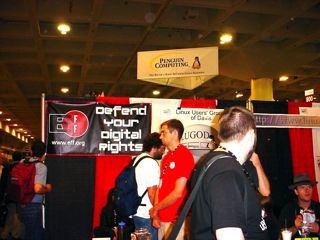 Support these guys - you may be the next one subpoena’d by the RIAA. I dropped a $5 bill in their donation jar, as good karma.

As expected, RedHat had a gigantic booth. Not much free swag from them, but the booth was huge, approaching AMD’s, and as easily as big as Microsoft’s. 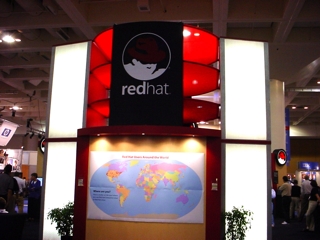 It was good to see RedHat here, as they’re now taking up the flag against SCO. I was rather surprised that Debian didn’t have a booth, but I think the hippies couldn’t get their yurt up in time or something. /me ducks.

HP had a friggin’ huge booth. Kinda weird, considering they don’t really support Linux all that much. No printer drivers to speak of, scanner drivers are non-existent, their main enterprise OS is HP-UX… oh, yeah, I know why they were there! To sell hardware. Check out their booth: 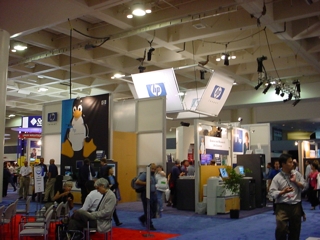 Lots of flash, but not a whole lot of substance over there at HPaq. Too bad - they were the number one company I wanted to work for at one time.

Intel had a huge booth, which SGI had a small piece of: 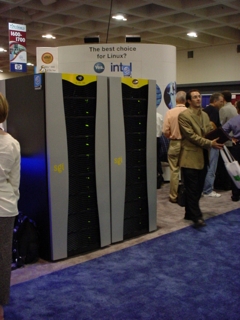 These two Itanium-based servers were running Linux. It was good to see the SGI name - too bad that SGI’s been reduced to an Intel reseller for the most part.

Sun Microsystems also had a huge booth there - not surprising, since they are a major contributor to the show. 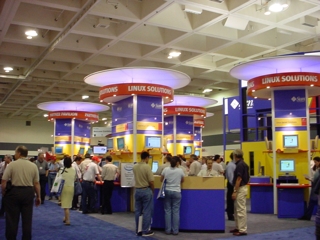 Sun was showing off the SunONE software stack, along with their Intel-based offerings. Solaris was mentioned heavily, as well. 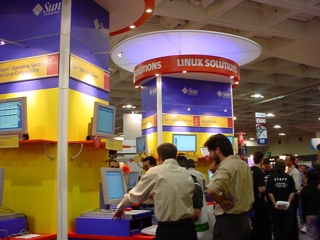 An aside: play “Spot the Product Manager” in the above photo. :)

Penguin Computing was there as well - they’ve been a staple at Linuxworld for as long as I can remember. 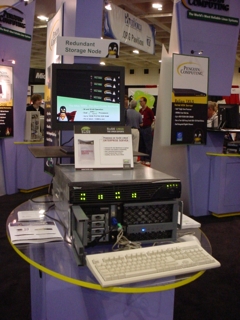 Most of what Penguin Computing showed off were 1U servers and blade-type technology - I hate to say it, but that stuff was cool a couple of years ago. I find it hard to get worked up about a “sexy, 1U box” or some new “blade technology”. Yeah, it’s useful - but it’s certainly not groundbreaking anymore.

On to convention features - Linuxworld always has a batch of PCs running Linux in the center of the show for people to check mail on, and this year didn’t disappoint: 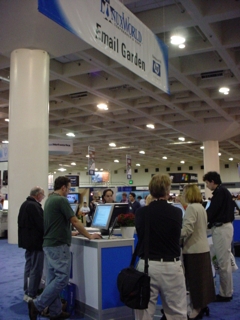 Note the swank flat panels these guys are sportin’. No CRTs here. Overall, a nice addition to the show - unless you could get wifi access. And let me tell you, there was no shortage of wifi access. KisMAC counted at least 20 APs in service at Linuxworld - check out the screenshots:

I especially like the one with ID #12: “microsoft sucks” backwards. Heheheh.

Of course, that density of WiFi traffic in such a small area made for huge amounts of interference. If you weren’t practically on top of the AP, you got crappy signal, and even had a hard time associating with one of the ‘nets. That’s the problem I had… until I ran into these two guys: 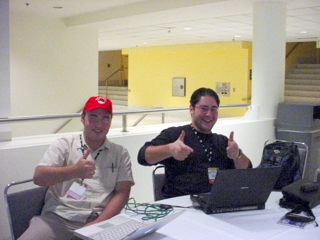 The guy with the RedHat hat on was plugged into his buddy’s laptop via ethernet - they were sharing access via NAT. Since he had a Mac, he made an adhoc net that I joined so I could get access. Add up all the NATing going on, including the NAT provided by the AP, and that was a triple NAT. And it worked!

Well, that concludes this year’s Linuxworld report for me. Overall, the convention was pretty good - though not up to pre-bubble-burst standards. I wish I could’ve had more time there. Props to the bandwidth kids who let me leech from them so I could check mail and chat with the guys on #linux.